You know how sometimes you can date an old photograph by how you wore your hair? Oh, I had a perm there, must have been the summer of 1988…. Of course it’s not just your hair that speaks to what year it was. Often, a hairstyle in a vintage photograph will immediately reveal the decade. Today, we’re looking back at some of the most recognizable hairstyles through the years, and offering tips on how to bring that look into the twenty-first century. 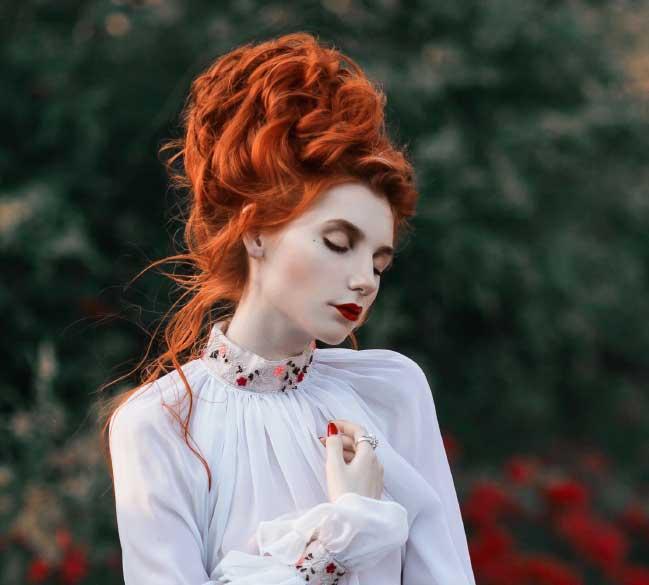 The Victorian era left a lasting mark on early twentieth century hairstyles, but the rigidity of the era gave way to more flowy styles in the early 1900s. While more "undone" than their Victorian predecessors, these hairstyles were still much more assembled and refined than what we might think of as free-flowing today. These early 1900s styles often featured a center part, partial pin ups, and some embellishments—think metallic headpieces and floral adornments. The ultimate goal of hairstyles during this time was to highlight one’s volume, which is evident in the choice of long drop curls and ringlets during this era.

Tap into the voluminous beginning of the twentieth century and keep it modern by opting for big, loose waves. We recommend applying Style on damp hair prior to blow drying hair. Smooth some more product on dry hair before using a curling iron to protect from heat, and finish with Tame to hold your curls. Use metallic bobby pins to pull hair half back, nodding to the polished looks of the 1910s. 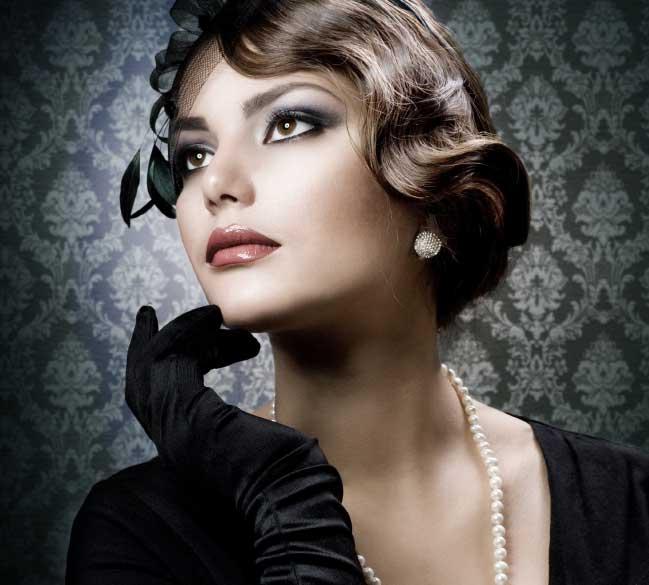 While long hairstyles remained fashionable in the 1920s, the new decade marked an increased interest in hair accessories, like felt and wool hats, jeweled pins, hair bows, and headbands. Soon, a new hairstyle emerged amidst the prevailing trend of long tresses—the short bob. A radical change from the norm for women’s haircuts, the bob took a firm hold in the 1920s, and its popularity extended into the next decade. The style could be elevated with the use of hair accessories, and in Depression-era America, women appreciated the ease of the finger wave—a style women could do at home without the expense of a stylist or the need for an iron. These face-framing styles were able to reflect both the prosperity of the 20s and the scarcity of the 30s, all in one signature look.

Although women in the 1930s were big fans of the finger wave, it’s actually a very challenging style to achieve at home—at least if you want to style your hair quickly. You can achieve the feel of the early twentieth century look by setting simple pin curls overnight and opting for a deep side part when styling. For a nod to the 20s, use a bejeweled hairclip or headband. 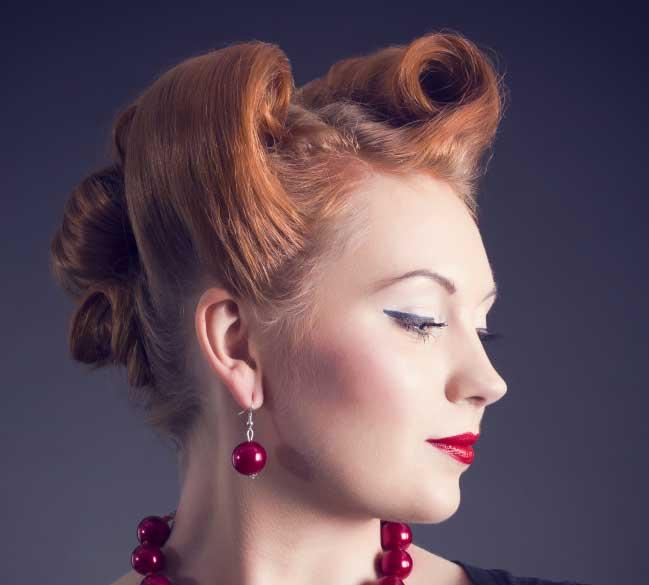 The late 1930s saw a growth in hair length, lowering the cheekbone skimming bob to shoulder length and below. In the forties, women styled their hair in a variety of different styles, including soft, romantic curls and half updos, made famous by actress Vivien Leigh. The classic chignon became a popular styling option for 1940s women, as it could be worn both for an event or evening out—wavy volume in the front with a precisely twisted bun in the back—and day-to-day wear—a quick low bun at the nape of the neck worn alone or with a silk scarf.

Achieve a modern take on the 40s chignon by creating a messier look. Loosely pull hair into a low ponytail and secure with a clear elastic. Loosen up the ponytail, allowing a few strands to fall out in front. Coil the ponytail widely around the elastic and secure in place with bobby pins. Pull at the bun to give it a choppier, less finished look. Pair the carefree style with a bold lip to make it evening ready. 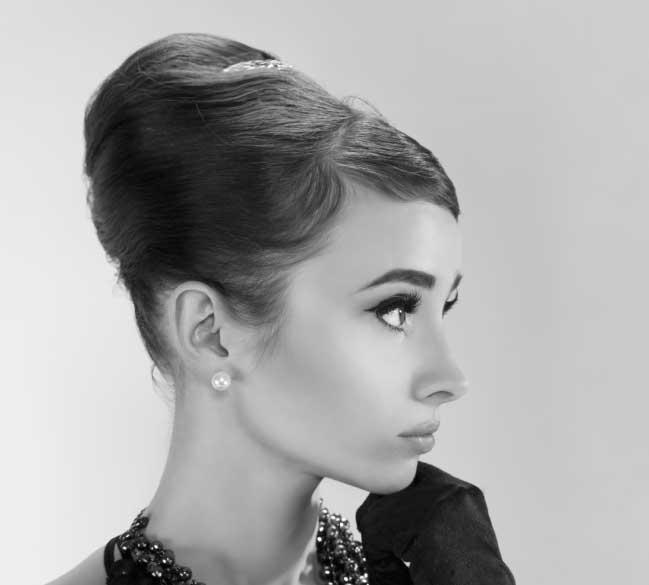 Taking the soft curls of the 1940s in a slightly more dramatic direction, signature styles in the 1950s include the velvet curl, often recognized by the sweeping curl over one eye—a classic look in old Hollywood—and a deep center part. The 50s also introduced big bouffant styles, achieved by backcombing hair to add extreme volume, usually at the top and back of the head. These styles could be worn in an updo—think French twist or chignon—or down, often being paired with soft curls beneath the bouffant.

The old Hollywood velvet curls are easier to achieve than you might think. We recommend applying Style on damp hair prior to blow drying. Smooth more onto dry hair before using a curling iron to protect from heat, and wrap one-inch sections of hair up the base of the iron. Spritz Tame on your curls and gently brush the curls down, which will give them a softer look. Add more Tame to hair to add hold after brushing curls out. 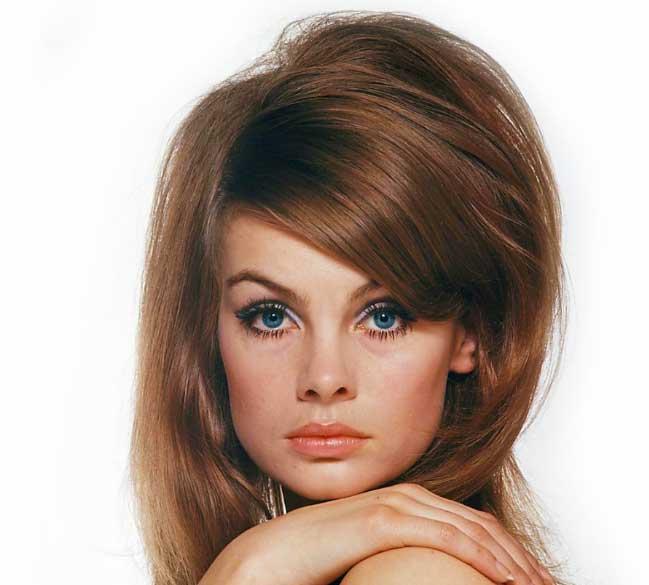 The big bouffant became a touch more modified in the early 1960s—styles derived from the beehive included the volume of the backcomb with a bit less height. But with the emergence of the Hippie movement in the later ‘60s, the voluminous and curly styles that were once revered gave way to long, slick straight, center-parted styles. To get this new, straight look, many American women would use an ironing board and iron to smooth out their hair.

Fortunately, the invention of the flat iron makes it much easier to achieve this signature style. Apply Style on damp hair prior to blow drying. Smooth more product onto dry hair before using a flat iron to protect from heat. When complete, part hair in the center, and comb through. To modernize the look, opt for a messier part. 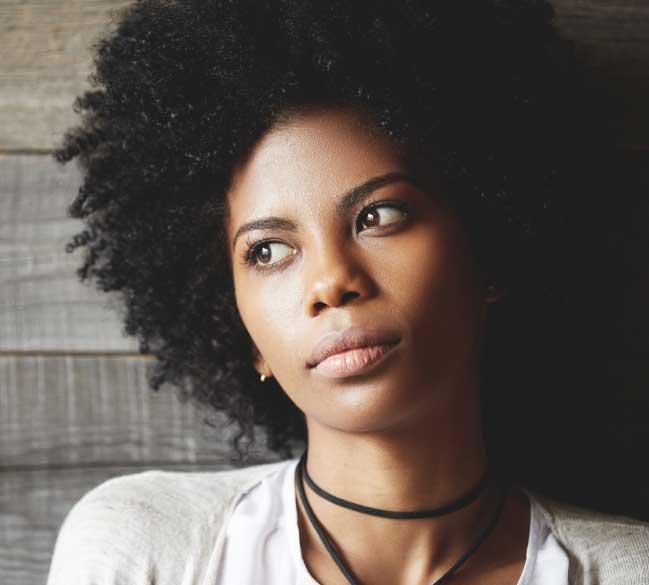 The uber long locks of the 1960s continued into the early 1970s, often accompanied by flowy waves, a headband, and even some floral decoration. But as the ‘70s advanced and the disco era began, volume and curls came surging back into style. For African American women, the 1970s marked a period of time where natural hair was celebrated, and many women opted for an Afro, rather than relaxing their hair. The late seventies also introduced Farrah Fawcett’s signature feathery, shag style, which became popular for many women to try on their own.

If you’ve got a round brush and a blow dryer, you can play off of Fawcett’s late 70s style without going to the extreme layering. When blow drying—and always be sure to use a heat protectant like Style first—brush the front pieces of hair outward with your round brush and dry. Finish with Tame to provide hold and protect hair from the elements. 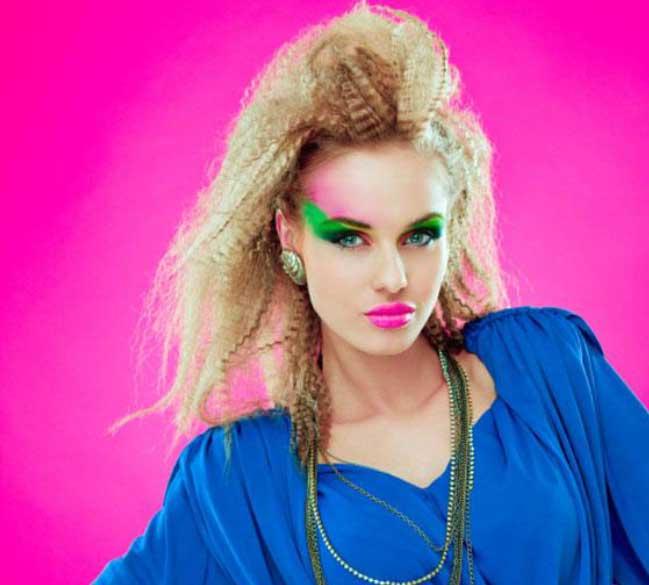 Bigger was better in the eighties, and many of the hairstyles from that decade help articulate that point—remember the big curly ringlets and crunchy waterfall bangs? The eighties also opened the door for more daring styles, like Bowie-inspired femme mullets and vibrant hues. Perms were a favorite styling choice for many American women in the 1980s and celebrities often wore dramatic, sculptural hairstyles. Of the many styles that came out of the eighties, one with continued staying power is the power ponytail.

Rocked by Madonna in the ‘80s, the power ponytail is a high ponytail that is pulled tightly from the face. Update this look by wrapping your ponytail with a braid, or by curling the ponytail with a curling iron. 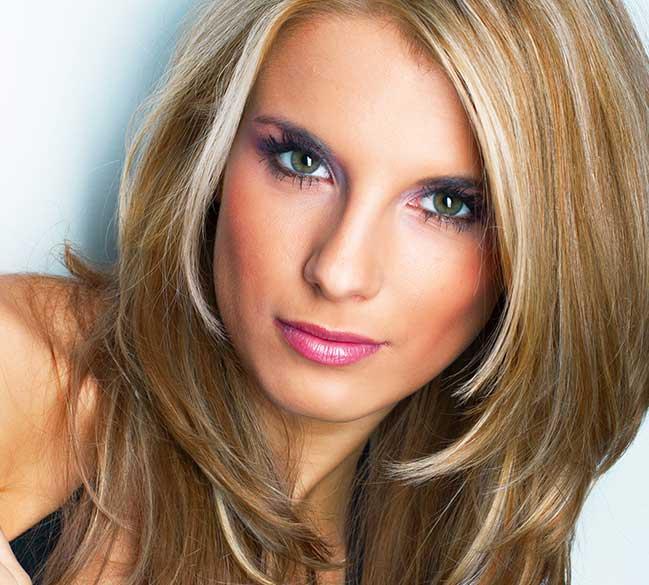 Where the eighties pushed for big, attention-seeking hairstyles, the 1990s offered a more toned down look, whether hair was stick straight, curly, long, or short. But of all of the styles of the nineties, there’s a clear frontrunner for most iconic—"The Rachel" from Friends. Jennifer Aniston’s style was a shoulder-grazing look with a lot of face-framing layers and chunky highlights.

While we left The Rachel in the nineties, Aniston’s chosen hair length is one to be replicated today. Instead of the extreme chopped layers, choose a long, asymmetrical bob. It has a bit of edge with the relaxed look that the nineties tried to achieve. Plus, the shoulder-length gives the best of both short and long hair! 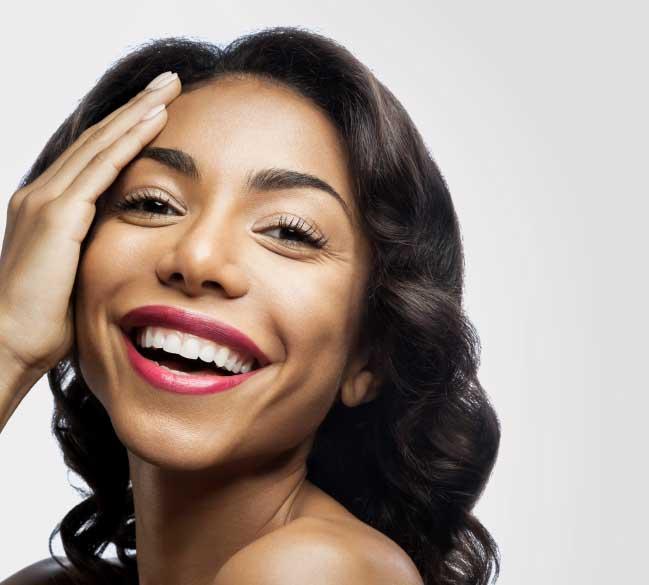 Twenty-first century hairstyles represent a mix of previous styles. From the crimped pop star tresses of the early aughts that called back to the ‘80s to current-day beachy waves that offer a more casual take on 40s and 50s curls, the 2000s have given women a lot of different options when it comes to styling their hair. Regardless of what style you choose, it likely has its roots in another era. What decade does your signature style belong to?